What is the Gas Cluster Ion Beam?

The Gas Cluster Ion Beam (GCIB) technology is an advanced technology from Japan, developed at Kyoto University. GCIB is an ion beam consisting of several thousand gas atoms (molecules) such as argon, which enables ion beam etching with extremely low energy per atom and surface flattening after etching, not possible with other ion beam technologies.

Fig 1, Comparison of the characteristics of ion beams of the past and cluster ion beams

In surface analyses such as XPS and TOF-SIMS, cluster ions have always been used. Among cluster ions, C60 ions in particular are capable of surface cleaning and low damage sputter etching on many polymers and organic materials, and are thus used in many commercial analyzers, with several dozen currently in practical use for surface analysis around the world. Ar gas cluster ion beams leave hardly any recognizable chemical change caused by the irradiation ion on the post-etching surface, it enables low damage/high depth resolution etching with ultra-low energy ion etching at approximately 1 to 20 eV per atom, which cannot be accomplished with C60.

Figure 3 shows the exterior of the instrument released. A compact GCIB instrument for surface analysis was developed jointly by ULVAC, Inc. and ULVAC-PHI, Inc. 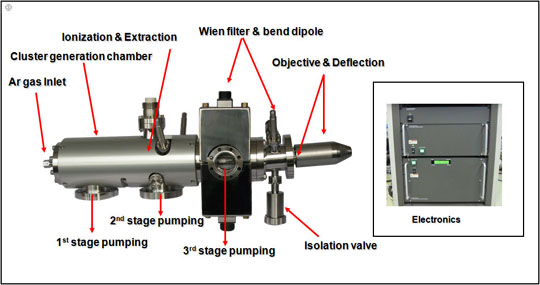