Time-of-Flight Secondary Ion Mass Spectrometry (TOF-SIMS) is a technique in which an ion beam (primary ion) is irradiated on a solid sample and mass separation of the ions emitted from the surface (secondary ions) is performed using the difference in time-of-flight (time-of-flight is proportional to the square root of the weight).

TOF-SIMS can obtain information regarding elements or molecular species within 1 nm of the sample surface at a very high detection sensitivity.

The number of primary ions per unit area irradiated on the surface is small, at around 1012 ions/cm2 or less (number of atoms on the surface of a silicon sample is 10 to 15 atoms/cm2), allowing for near-nondestructive analysis. 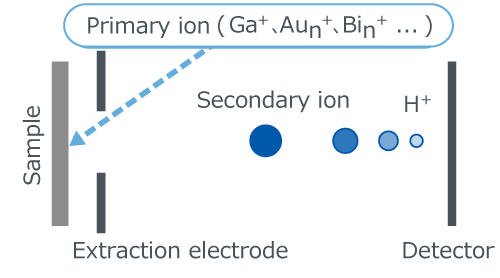 In TOF-SIMS, a Liquid Metal Ion Gun (LMIG), which has a submicron-level probe diameter and can achieve pulses of a few hundred picoseconds, is widely used as the primary ion source. With LMIG, there are 3 types of ion sources to choose from, Ga, Au, and Bi. Ga ion beams are all monomers, while Au and Bi ion beams include many polymer ions. High-mass molecules can be analyzed efficiently by using polymer ions. Ga ions are suitable for analysis of low-mass areas (mainly elements) and Au and Bi ions are suitable for high-mass areas (mainly molecules).

TOF-SIMS can measure either conductive or insulating materials, and it does not matter whether the sample is in the form of a powder, fiber, etc., as long as it can be introduced to a vacuum. When measuring insulating materials, primary ion and pulsed low-energy electrons are irradiated simultaneously to prevent charge build up on the sample due to primary ion irradiation. 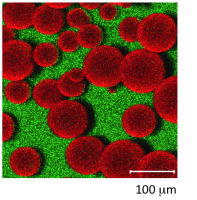 Secondary ions emitted from a solid surface have energy distributions from several eVs to several dozen eVs, and a wide emission angle, which leads to differences in arrival time at a detector even if their masses are the same. TRIFT analyzers correct for the difference in time-of-flight caused by differences in energy, by letting high energy ions go outside the orbit. Additionally, secondary energy can be captured over a wide angle, enabling images with less shadow even with unevenness measuring several 100 µm.

Since the information depth of TOF-SIMS is 1 nm or less, for thicker surface contamination layers, or when evaluating deeper areas, surface etching is performed using ion sputtering. An element composition or molecular structure depth profile can be obtained from the spectrum information gained through alternating between sputtering and measurement. For surface etching, a sputter ion gun is used in addition to the primary ion gun. Generally, oxygen (02) and cesium (Cs) ions are used for depth profile analysis for inorganic materials such as metals and semiconductors while fullerene (C60) and argon gas cluster ions (Ar-GCIB) are used for organic materials, so different sputter ion guns are used depending on the material and purpose. 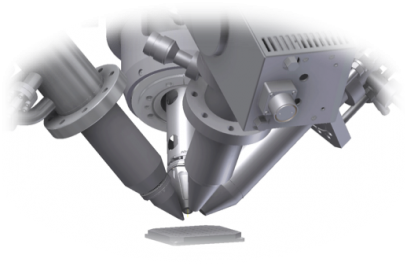