Semiconductor chips consist of a series of thin films that have been patterned to produce electronic devices. The use of surface analysis instruments to characterize the composition of thin films or patterned structures and detect contaminants or process residues is critical to the development of new materials, manufacturing processes, and increasing product yield.

The ability to identify the composition of nano-scale defects and determine their source of origin is critical to enhancing device yield. The continued shrinking of device size and critical defect size has limited the usefulness of optical methods and EDX analysis for sourcing ultra thin and ultra small defects. The PHI 700 Auger Nanoprobe is ideally suited for this application.

Fig. 1: A 50 nm diameter defect is confidently identified as being composed of aluminum. 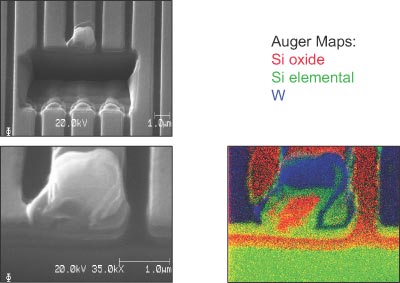 Fig. 2: A buried defect, exposed by a FIB cut, was found to be a silicon dioxide particle encapsulated in silicon. It appears that the particle was formed during polysilicon and tungsten processing.

Fig. 3: In the example shown above the mass 56 peak has been analyzed with a mass resolution (m/Δm) of greater than 15,000 revealing metal and organic contaminants that are present at the same nominal mass as 28Si2+.

Fig. 4: Shown above is the depth profile of a 500 eV boron implant obtained using a 500 eV oxygen sputter ion beam.