What is a surface? A surface is the part of solid matter that can be touched by hand or seen with eyes. In other words, it is the place where the solid matter encounters the outside world through contact, light, etc. Solid matter not only effects humans with its surface, but also air, water, and other solid matter. Therefore, things around us work cooperatively with the outside world and with other things through surfaces, without a surface, solid matter would not be able to interact with anything. 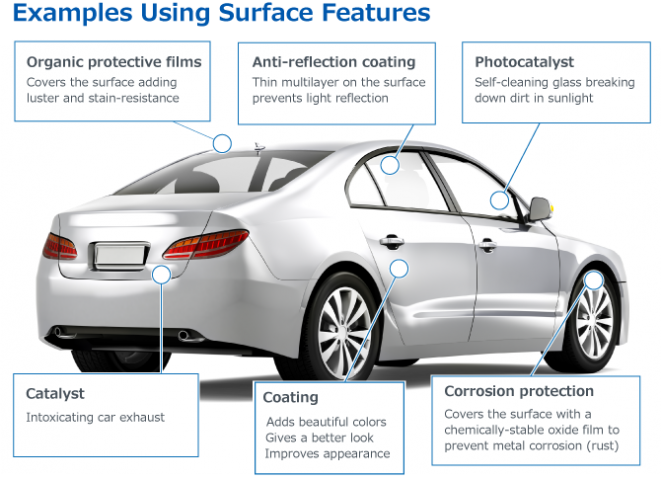 For example, let's look at an automobiles as an example. The body of an automobile is made of hard steel plates. The steel plates are covered with a chemically stable oxide film to prevent the steel plates from corroding (rust). Also, the surface of the body is painted to add a nice color, and by coating that with a chemically stable polymer, luster and resistance to oil stains and fingerprints are added, and scratches are less visible. On transparent glass, a film coating to prevent the reflection of light and a photocatalyst, which is a surface treatment that breaks down stains, are used to add various additional features without changing its characteristics as a transparent and solid material.

Thus, it has become increasingly important today to design and improve surfaces, and to know the surface properly to develop products with high functionality and added value.

Interaction with things contacting the surface

Different kinds of solid matter have different characteristics.Among them, characteristics that do not necessarily require interaction with the inside of the solid matter, i.e. contamination prevention, corrosion protection, adhesion, hardness, friction/lubrication performance, color (for opaque solid matter), conductivity/insulation (electrical properties), magnetic properties, can be changed by changing the characteristics of the surface.

For example, typical semiconductor devices interact electrically through the surface. Magnetic devices such as hard disks exchange magnetic information through their surfaces.

On the other hand, for characteristics involving the entire material such as the strength and elasticity of solid matter, or those that penetrate materials such as electromagnetic waves and radiation, and light for transparent materials, the impact of the surface is generally small.

In contrast, when the solid matter is small, the percentage of the surface becomes larger, and interaction with the outside world increases.

Importance of knowing the surface

Let's take titanium alloy as an example to discuss the impact of the surface on its physicality. Titanium alloy is an excellent light and solid material used in many functional materials such as eyeglass frames, shape-memory materials, and medical materials for orthopedics and dentistry. However, a detailed investigation of its surface shows that titanium alloy itself does not exist on the surface. There could be some kind of change occurring due to interaction with the outside world, or the surface may be processed for purposes such as adhesiveness, chemical stability, and biocompatibility. Additionally, the surface can become prone to oxidization (discoloration) due to changes in properties where certain components in the titanium alloy gather on the surface during formation. Therefore, it is very important to examine whether the surface is structured as expected, or how it is changing through interaction with the outside world.

In order to discuss contamination and adhesiveness of solid surfaces, a very thin area called the surface number atomic layer must be analyzed, and for the color, electrical/magnetic properties of the solid surface, properties of an area 1 micron or less from the surface needs to be understood in detail. However, since general chemical analysis methods often use techniques to examine the composition of the solid matter as a whole, there is a need for methods of surface analysis.