By using current surface analyzers, the elemental composition and chemical state of materials that exist only in the surface number atomic layer can be analyzed, which is not possible with other analysis methods. Surface analysis methods have advanced with the needs of the times over many years as an essential technique for R&D and quality management of materials with new characteristics and features in many industrial and scientific research fields.

Use of surface analysis

The outermost part of a material, its surface, is an extremely sensitive part which bears the surface characteristics such as chemical activity, adhesion, wetness, electrical properties, optical properties, corrosion-resistance, friction, and biocompatibility of the material, and it is also a part that is prone to losing such characteristics by degradation and contamination of the environment, adhesion of process residues, etc.

Thus, surface analysis is used not only for the development of new surfaces with high functionality and products utilizing them, but also for helping materials with high functions properly exhibit their functionality. For example, in the process of semiconductor manufacturing, even a minimal amount of contamination or adhesion of foreign matter on the surface can lead to the product not meeting its quality standards. Also, when contamination is found, the contaminant component must be analyzed first to clarify the cause.

However, the area to be examined may not necessarily only be in the extremely shallow area called the surface number atomic layer, but in a deeper layer. At times, information on slightly deeper areas from several dozen nanometers to several hundred nanometers deep are needed. In such cases, a technique called depth profile analysis is used. By scraping the surface using Ar ions or the like, performing measurements on the uncovered area, and then repeating this process, slightly deeper areas can be examined. In order to examine the number atomic layer very close to the surface of a solid, the effects of the measurement environment must be reduced as much as possible.

To do so, when actually performing the analysis, the solid sample is placed in vacuum for measurement. Inside the surface analyzer, a reduced pressure state called ultra-high vacuum, with a pressure one billionth that of atmospheric pressure or lower is created. By controlling charged particles such as x-rays, ions, and electrons and irradiating the surface in such an environment, information on the chemical structure of the surface can be detected accurately.

Types and characteristics of surface analysis

The main types of surface analysis include XPS, TOF-SIMS, and AES.

XPS is a technique in which x-rays are irradiated to analyze the energy of photoelectrons generated by the photoelectric effect. It is characterized by its ability to analyze surface compositions and chemical-bonding states. Its analysis area is limited to several microns at most, but it can be used for the surface analysis of various materials regardless of whether they are organic or inorganic.

TOF-SIMS is a technique in which high-speed ions are irradiated to analyze secondary ions emitted from the surface. It is characterized by an extremely high surface sensitivity, its ability to obtain organic compound molecular mass information, and to perform high sensitivity inorganic element analysis. In the past, it was mostly used for surface metallic contamination and organic material analyses for semiconductors and display materials, while more recently it has been used for the analysis of organic matter distribution and segregation on organic material surfaces.

In AES, electron beams are irradiated on samples and the generated Auger electrons are observed to perform qualitative/quantitative analysis of the surface. Since the primary excitation line with AES is electrons, it can function as an electron scanning microscope. Additionally, it is characterized by extremely high spatial resolution compared to other surface analysis methods. AES demonstrates its strength mainly in the observation of metal and semiconductor surfaces and micro-level foreign substances on surfaces.

Next, let's look at the principles and detailed characteristics of XPS, TOF-SIMS, and AES. 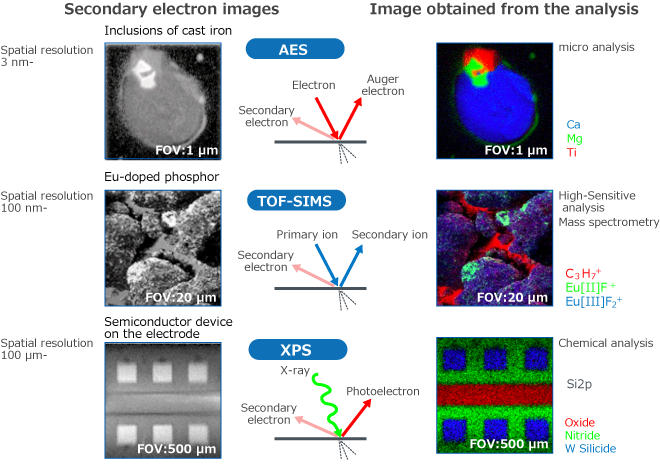