UP’s lab members explained about three analysis cases along with the sales department introducing some customized products. In addition, a free discussion session was added in the meeting schedule for the first time allowing users to discuss and share their opinions.

The meeting was held as described below:

Expectations for HAXPES, a Technology for Extracting Deeply Buried Information 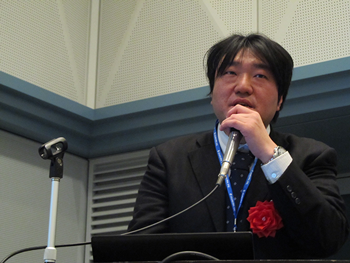 Mr. Saze from Toshiba Nanoanalysis has made substantial achievements in research using HAXPES systems including the Spring-8 synchrotron radiation facility for 10 years. Mr. Saze explained the differences between synchrotron radiation based HAXPES, laboratory-scale HAXPES, and XPS, along with actual analysis cases.

He explained that since synchrotron radiation based HAXPES provides a larger probing depth and enables evaluation using core level photoelectrons, but is not suitable for ordinary use, he is placing his expectations on laboratory-scale HAXPES that allow analysis with higher excitation energy.

In the question and answer session, questions about quantification and chemical state analysis were asked, and users' expectations for database storage and their strong interest in this field were demonstrated.

With In-situ Observation of Battery Materials in View 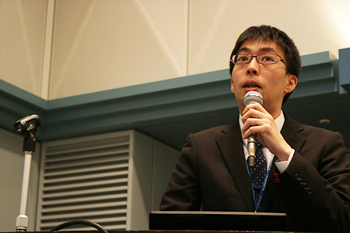 Dr. Ishida from the NIMS, which is engaged in research on in-situ observation of battery materials, delivered a lecture on chemical-state analysis of lithium using AES.

Focusing on various advantages of AES analysis of lithium, such as high spatial resolution, chemical-state analysis, and versatility as an instrument, he introduced observations of the process of oxidization of metallic lithium and analysis cases of lithium used as a battery material.

Hair Damage Can be Seen by TOF-SIMS 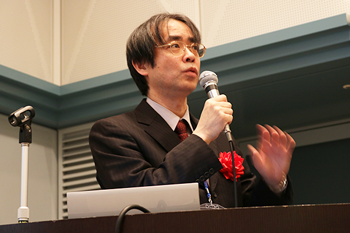 He delivered a lecture on damaged hair and a method of determining 18-methyl eicosanoic acid, a component present specifically in the surface layer of hair, by using TOF-SIMS. He explained that TOF-SIMS is put to effective use in developing haircare products that are gentler on hair. He also talked about a depth distribution analysis of cysteine in a single cuticle layer using a gas cluster ion beam (GCIB).

The lecture on the analysis of hair damage, a topic that is familiar to us, attracted much attention from the participants, and was followed by a vigorous question and answer session. In particular, the analysis of biological specimens using GCIB attracted a lot of questions. It was a very interesting lecture that showed that the properties of hair can be seen by using TOF-SIMS as a surface analysis technology.

In Order to Determine the Amount of Hydrogen Diffused in Glass 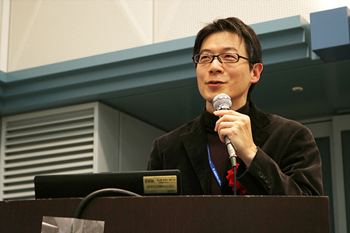 Dr. Yamamoto from Asahi Glass has been actively engaged in research on glass surfaces using various surface analysis techniques. Mr. Yamamoto reported on the results of an analysis of the amount of hydrogen diffused in glass using D-SIMS.

Soda-lime glass made by the float method has been used more and more in electronic devices such as photovoltaic cells. To investigate the surface properties of soda-lime float glass, the amount of hydrogen diffused in the glass was estimated by XPS and the estimated results were compared with the measurements by D-SIMS. He made a presentation on this analysis and the optimization of the analysis conditions.

Questions about the optimization of the analysis conditions were asked. A deep discussion ensued, including a comment about the new finding that H+ is less mobile than Na+ and other mobile ions.

ULVAC-PHI's lab scientists gave presentations on a new system (a laboratory-scale HAXPES) and new technology (MS/MS) under development as well as trends found in overseas academic conferences (SIMS-XX, ECASIA'15, and AVS-62) and presentations summarized by subject.